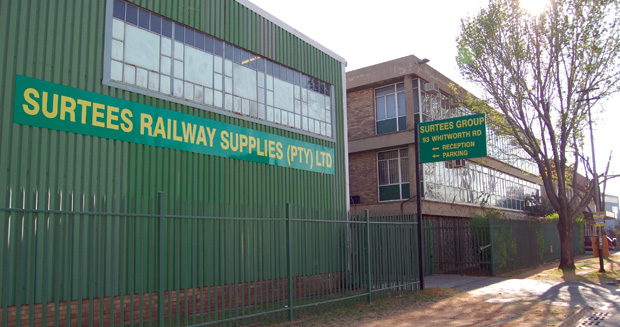 The company Surtees Railway Supplies (Pty) Ltd (S.R.S.), first called Surtees & Son (Pty) Ltd., was established in 1950 by Arthur Surtees, who prior to the aforementioned, had been a Director of Reunert and Lenz, a company based in Benoni  R.S.A. at the time, who was the locally appointed agent for North British Ltd., a steam locomotive manufacturing company based in the United Kingdom. In the same year Arthur was joined in the business by his son Colin.

S.R.S. operated initially out of an office based in Denver R.S.A, and started out by manufacturing, stocking and supplying steam locomotive and hopper equipment and parts for the industrial rail road industry in Southern Africa.

As a result of the introduction into Southern Africa of diesel hydraulic and diesel electric locomotives in the early 1960’s, S.R.S. also began to import, manufacture and stock equipment and parts for these locomotives.

In 1975 S.R.S. relocated to our present office, warehouse and workshop complex which is based in Heriotdale, R.S.A

In the 1980’s, steam locomotives were slowly being phased out and S.R.S. therefore began to concentrate its efforts on the supply of equipment and parts for diesel and electric locomotives and also for hoppers and wagons.

In 1990 S.R.S. substantially increased its warehouse space and also added a second workshop which allowed the company to offer specialized reconditioning and repair facilities for all types of rolling stock equipment.

In 1997 S.R.S. extended its reconditioning facility to include diesel locomotives and was appointed the agent for Trackmobile (bi-modial rail shunting machines) in Southern Africa.

S.R.S. continues to be highly regarded as a most dependable “One Stop” source for “off the shelf” components and parts for all types of locomotives and rail wagons as well as for rolling stock maintenance equipment.

THE SURTEES RAIL GROUP OF COMPANIES CONSISTS OF: